This article is going to be about scopes concept in JavaScript. Without knowing about scopes correctly, our code may work unexpectedly. So, to clear things up and to strengthen our concepts we'll be discussing these two here. I'll try my best to explain it in a beginner-friendly language. 🙌 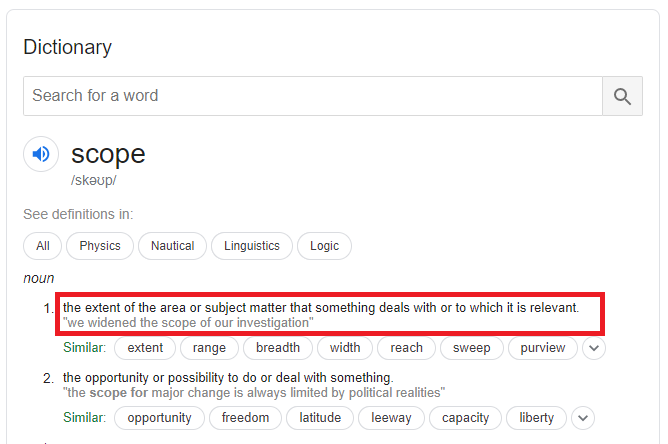 Let's look at the highlighted portion. It says,

the extent of the area or subject matter that something deals with or to which it is relevant.

So basically scope in JavaScript should be something like the area where something deals. Now, who deals is the first question that should pop up in our head after reading the description I gave. 🤔

Who?!! the answer is the variables in JavaScript.

So, in easy words

The Scope is the area in code from where a variable can be accessed.

Types of Scopes in JavaScript

In JavaScript, there are two types of scope.

A local scope can be further divided into two types, 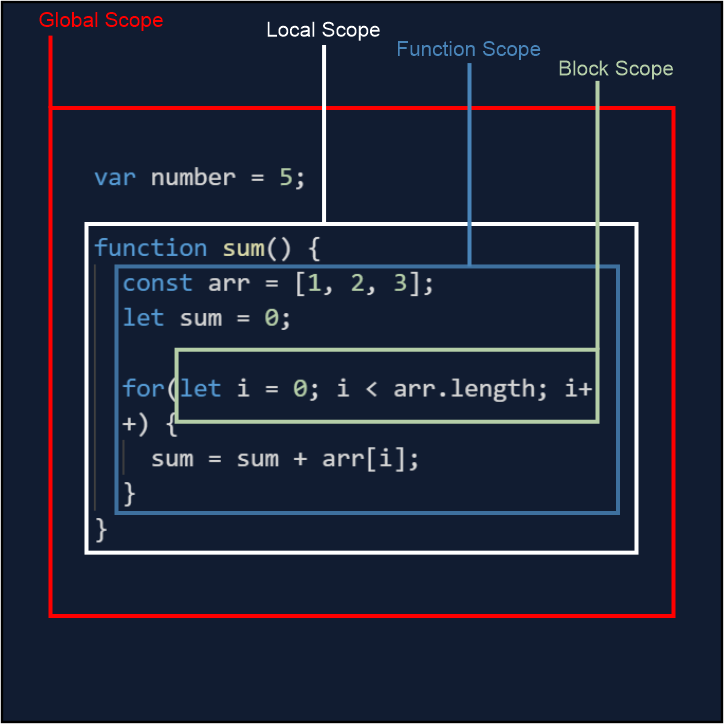 The above image shows the different types of scopes. The rectangles show the area where the variables are accessible. Now, let's discuss the scopes one by one.

Before ES6, the var keyword was used to declare a variable in JavaScript. And var declares all the variables in the global scope, even if the variable is declared inside a function or in block level. This means, any variable declared using thevar keyword or without a keyword is accessible from anywhere in a program. But this causes a problem if the program has the same variable at multiple places. So, usually, it is a good practice not to declare a variable in the global scope. This was another reason behind introducing let and const in ES6.

Another problem with var is that if a variable is already defined with var and if we declare another variable with the same name using var, it'll overwrite the old variable and assign the new value to it whereas let and const will give an error. This can be a huge headache while debugging code.

Because a local variable can be declared either in a function or in a block(like a for loop) or inside an if-else / while loops, JavaScript has two types of local scope, function scope, block scope.

Variables declared inside blocks like for loops or inside curly braces { } with let or const are block-scoped variables.

I couldn't come up with a better example, so just used this code. 😅

I hope this article somehow helped you understand the concept of scope in JavaScript. If you liked the article, please give a 👍 and comment your thoughts below. 🔥

Did you find this article valuable?

Support Subha Chanda by becoming a sponsor. Any amount is appreciated!